R-5246 was produced by De Havilland Aircraft at Hatfield as a part of Contract by the Air Ministry No. 20916/3. She was taken on charge by the RAF at 5 MU (Maintenance Unit) on the 26th of April 1940 as a RAF trainer. Transferred to 10. EFTS (elementary Flight Training School) based at Weston Super Mare on 2nd October 1940. 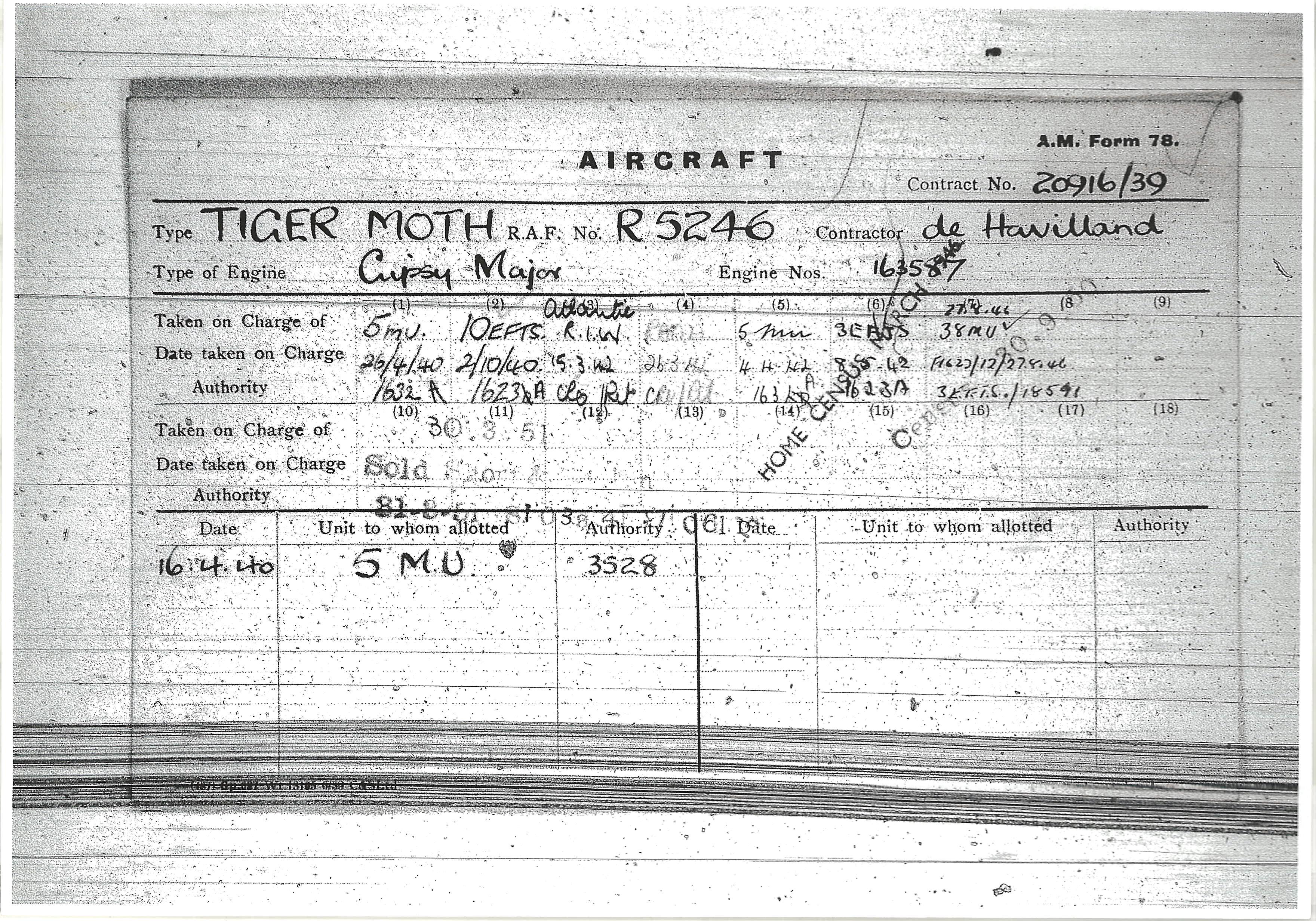 After crashing on 9th of MArch 1942 she was sent to Lundy and Atlantic Coast for repair. Back to 5 MU on April 4 1942 and then allocated with 3. EFTS in Shellingford on May 8th of 1942. 3. EFTS was the unit that trained the majority of Czechoslovak airmen serving under RAF in England during the war 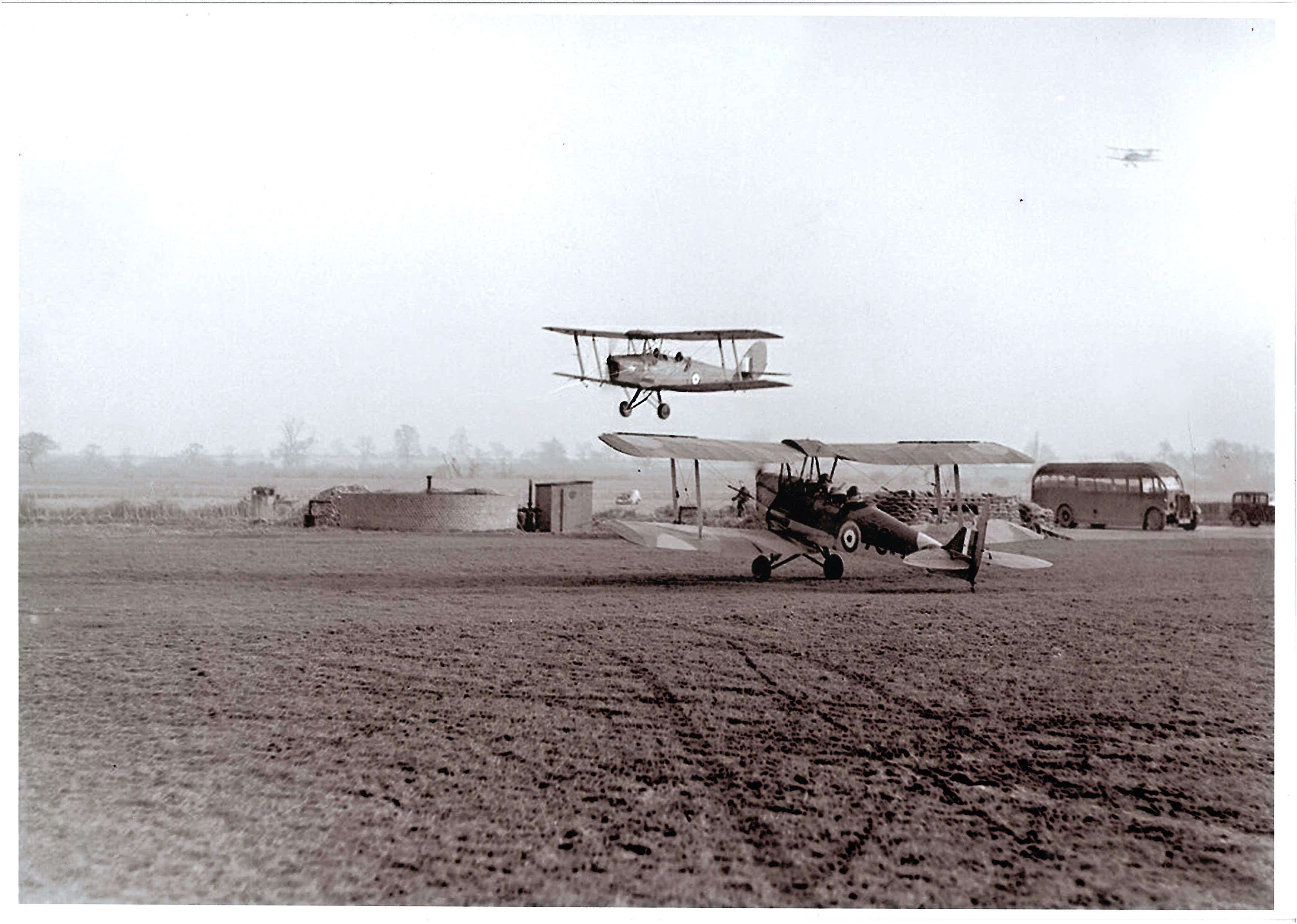 A training day in 1940s: R5246 on short final at Weston Super Mare while with 10. EFTS yet bearing early thick white RAF roundels.

Below: Western Museum of Flight DH-82A restoration volunteer, Maury Croskery of Thousand Oaks, Ca, and his first passenger in flight over the County Down, Northern Ireland coastline in R-5246 (G-AMIV) circa 1955. G-AMIV was one of several operated by the Ulster Flying Club which was sponsored by Short Brothers to enable its apprentices to learn to fly at very reasonable rates 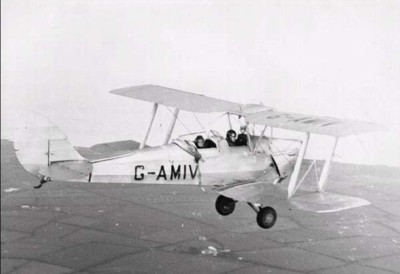 In September 1951 she was sold to Short Brothers in Belfast as a training aircraft. Subsequentally she was sold on to Rochester and Ulster flying club in February 1961, Harvey Foulds (private owner) in May 1962, Airspray (Colchester) Ltd in May 1964 where she was used for crop spraying. She was then sold to a syndicate in April 1967 who kept her until July 1968. Her history is then less clear. The next note indicates a transfer to an unqualified owner in June 1973. 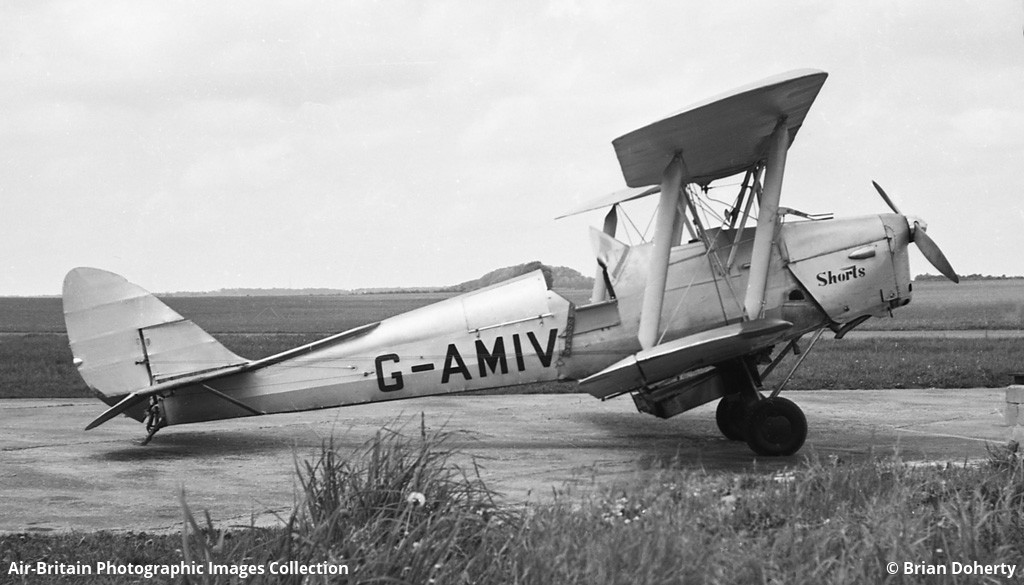 Above: G-AMIV photographed in 1957 while serving as a crop sprayer with Short Brothers.

Below first and second: Two years later at Biggin Hill, Below third: 1963 at Rochester operated by Harry Foulds

It is said she remained in a long term storage until being purchased by G. Turner in June 2005 at a car auction. He then transferred the aircraft to the Newbury Aeroplane Company where restoration work was started. Financial presures resulted in the sale of the aircraft to Kevin Crumplin in June 2006. The aircraft was then moved to his home in Somerset and Henstridge airfield where the restoration process has continued. The restoration was finished and the aircraft went airborne again in 2010. R5246 is restoraed in the flying museum standard which includes navigation and identity lighting, fire extinhguisher, blind flying hood, Gosport tube intercom, first aid kit and course and height indicator stowage, 1940 camouflage and RAF registratiom mark. The instruments (all of the correct period) have been overhauled and repaired by Airton Instruments. Anti-spin strakes are not installed as they were only introduced in 1942. The aircraft is covered by Newbury aeroplane Company using Irish Linen.

Back in 2012 the aircraft was purchased by the Fighter Factory (Hangar 10) and ferried by Clive Davidson to Heringsdorf where she became part of a remarkable collection owned by German enthusiast Volker Schulke. In April 2018 the aircraft was acquired by Richard Santus' Aeropartner and moved to her new home at Podhorany Airfield where she is now parked next to her war time fellow ship N9503.

May 12, 2018 R-5246 just arrived to her new homebase at Podhorany airfield, Czech and parked next to her one year older N-9503 sister-in-the-arm. Since then they can be quite often seen flying close formation for air displays or sightseeing.