Andrej Cepko - a pilot who is keen on aviation history. He started flying gliders as 15 year old boy. Recently Andrej works as flight instructor in a renowned Air School and as a corporate pilot on charter flights. Whenever there is such chance he would swap Cessna or Piper flight deck for a cockpit of aeroplanes adherent to the Czech aviation history. To let his child dreams come true on classic machines just like Tiger Moth or Magister- training legends of the WWII. It feels quite symbolic for a professional flight instructor to saddle an open historic airplane that used to be the very first bird for the majority of RAF pilots to solo on. 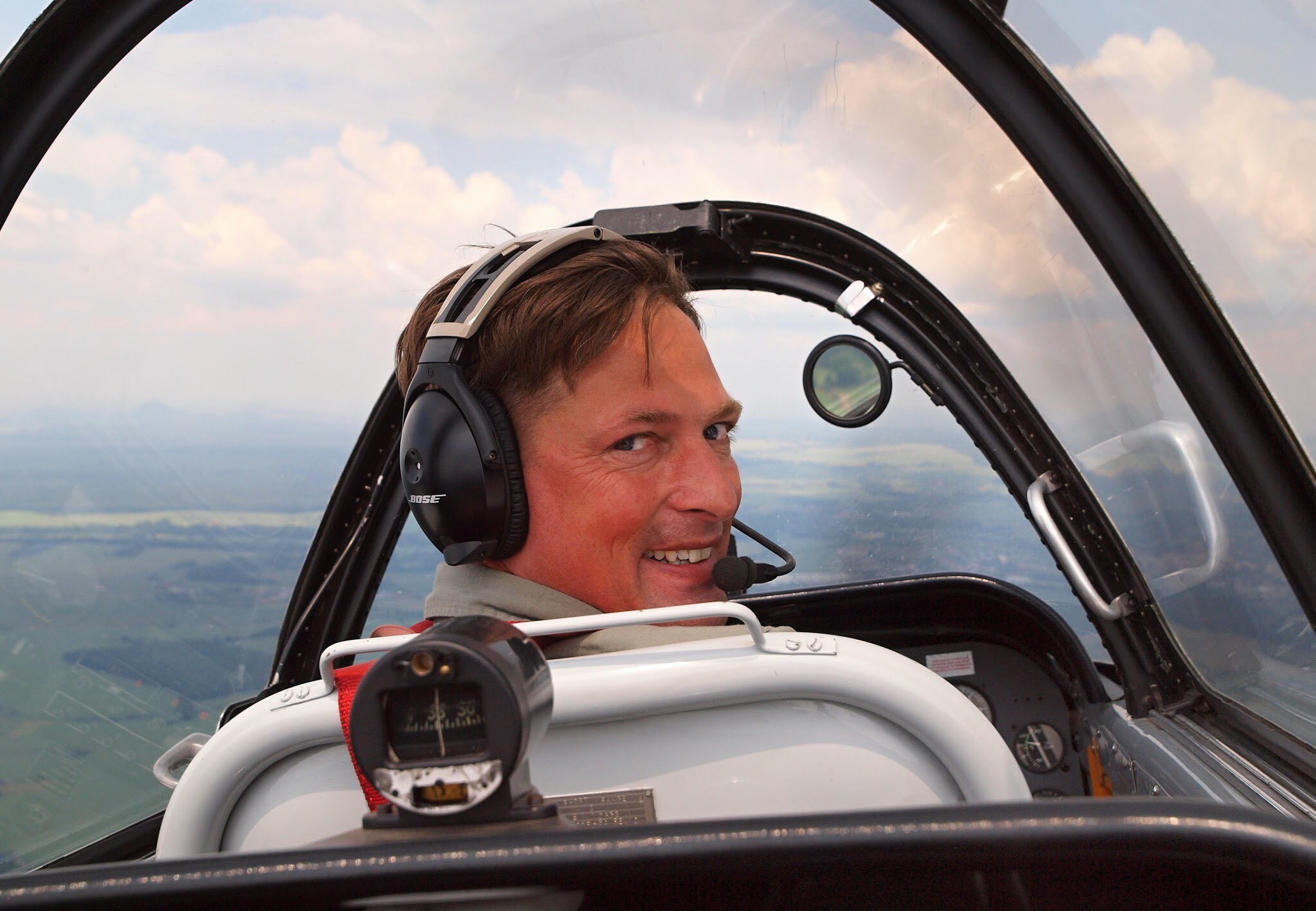 Ivo Kardoš - a fighter pilot of the Czech Air Force by profession. Apart from fulfilling all operational and training missions as any other elite pilot of the 211th tactical squadron he had displayed the supersonic JAS-39 Gripens on local and remote airshows in 2017-2020. Czech Gripens are based at Caslav AFB. On the way to Hradec Kralove where he lives there is Podhorany Airfield with Aviation Museum Hangar in one corner and few ancient airplanes in here. The contrast between the ultramodern combat aircraft and a historic biplane is ultimate. Ivo handles both virtuously and both he takes for honour to fly. Such combination is a guarantee that one can't guess any easily what is joy and what is work to him. 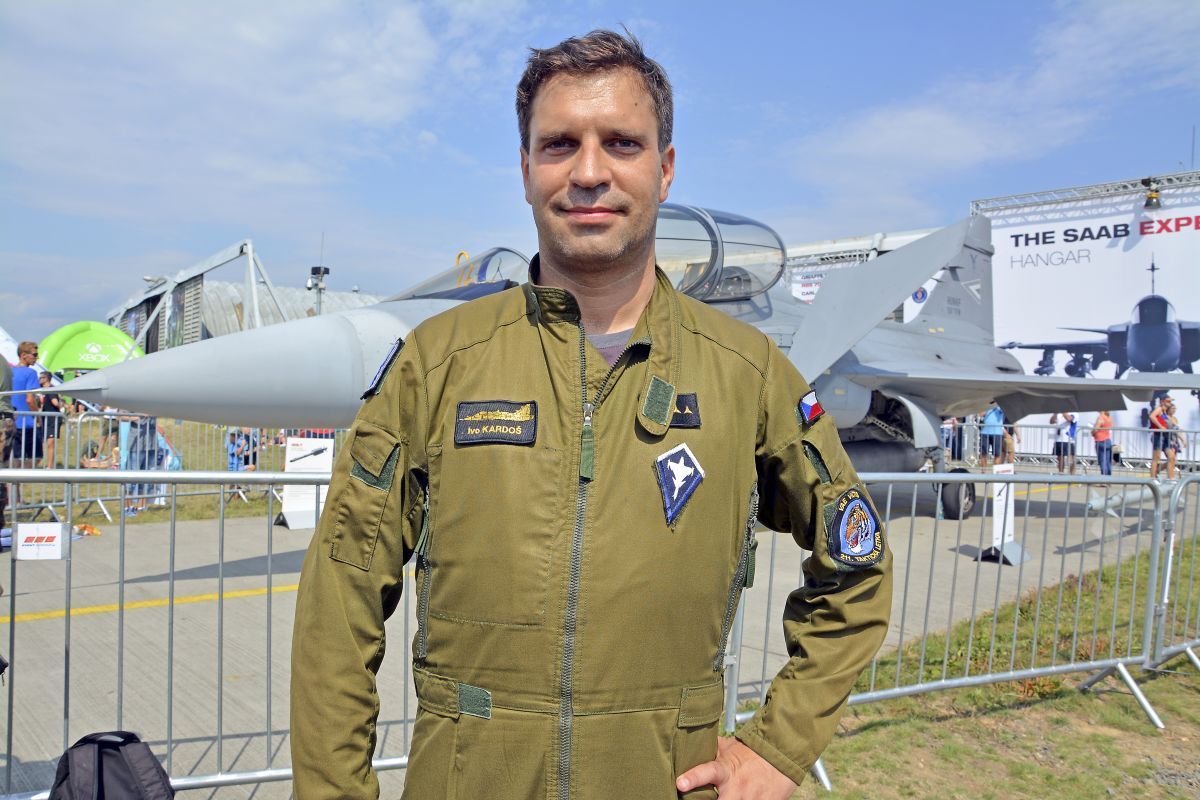 Ivo Kardoš  after his Gripen display on SIAF airshow held at Sliač AFB , Slovakia, in September 2017

Jan Karabec – We've chosen Jan for he is donatious, flexible, sensitized and skillful pilot. In his (young) age were the majority of Czechoslovak pilots embarking a duty with French and later Royal Air Force at the outbreak of WWII. In return their training was quick and efficient as was proved many times while with combat squadrons later on. His flying career was initiated the way it should- on an aeroclub airfield where he started on gliders aged 15. Thereafter he continued in the flying school on powered aircraft. Recently he studies Aviation at the university, builds his time at controls and expands his qualifications. He's always dreamt about flying especially on vintage aeroplanes. It's an honour, unbeatable experience and joy to him to ride an open cockpit warbird. 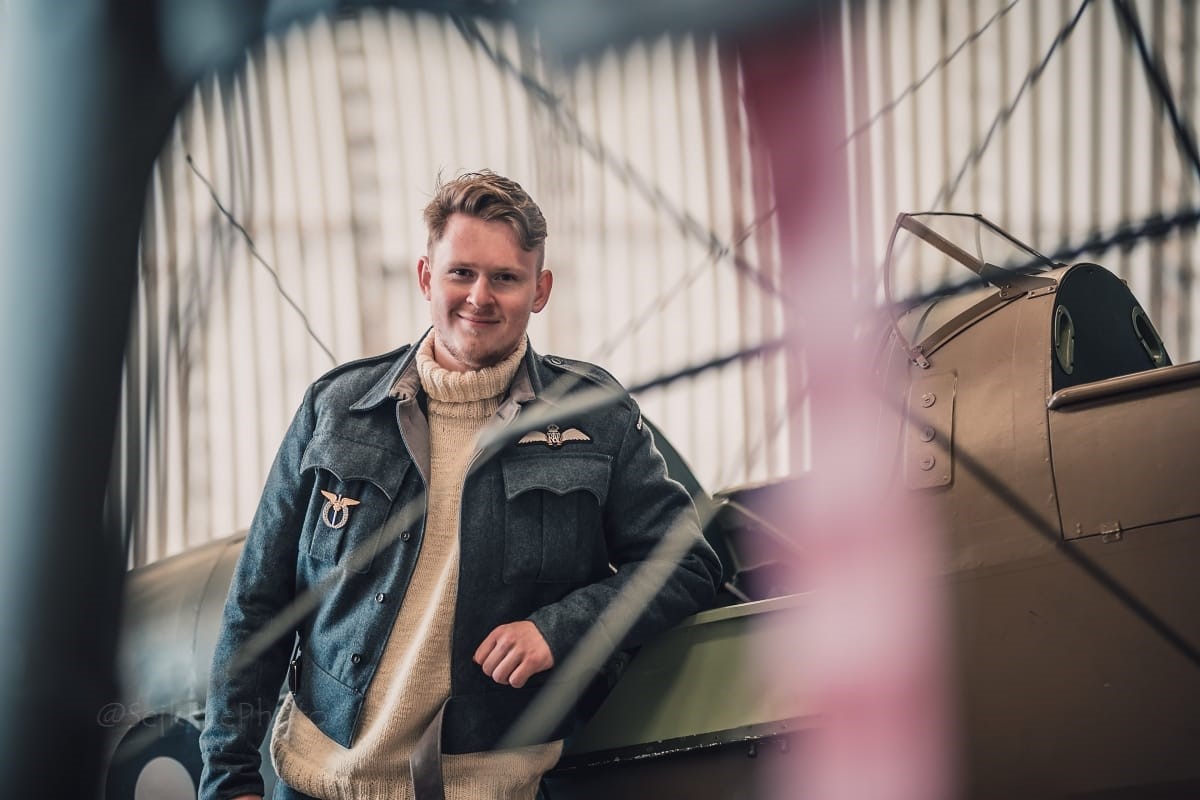 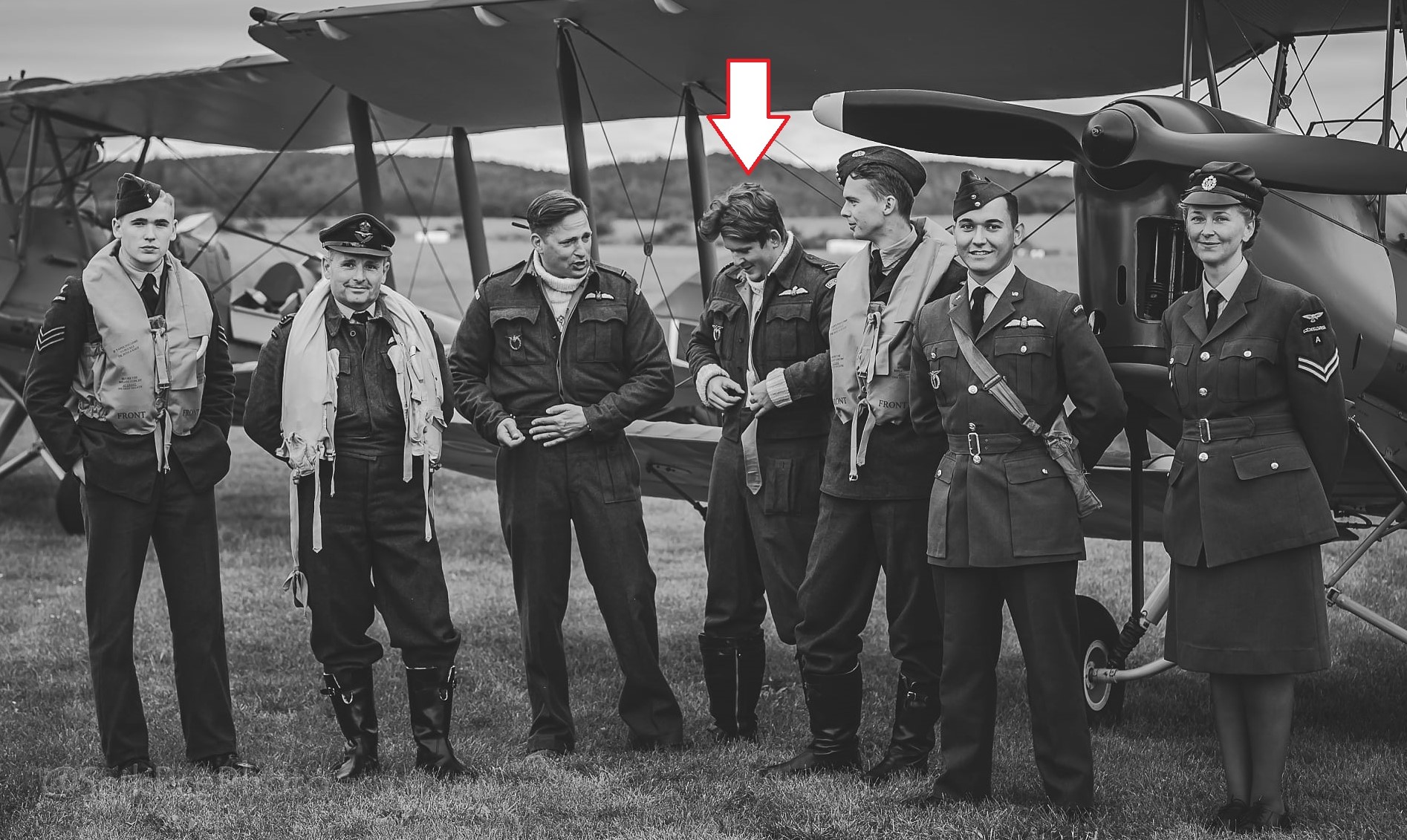 August 29, 2020: A snapshot from the mini/veteran gathering held to substitute the postponed III. Filed Concert. Jan Karabec is the fourth from the left and so from the right i.e. right in the middle (marked with an arrow to make his identity perfectly clear). (Jiří Sejkora).

Richard Santus – Founder of the R.A.F. Station Czechoslovakia. A professional pilot, Royal Air Force enthusiast and a promoter of historic heritage of Czechoslovak exile airmen. He runs Aeropartner a Charter Airline located at Prague international airport operating a fleet of Citation business jets. His pilots wear uniforms inspired by the WWII RAF service dress fitted with British and Czechoslovak insignia of that era. The international air carrier three letter code of Aeropartner is DFC. It also stands for the "Distinguished Flying Cross", a British distinction to airmen who demonstrate acts of valour, courage and devotion to duty. During WWII, tens of Czechoslovaks were awarded the DFC. 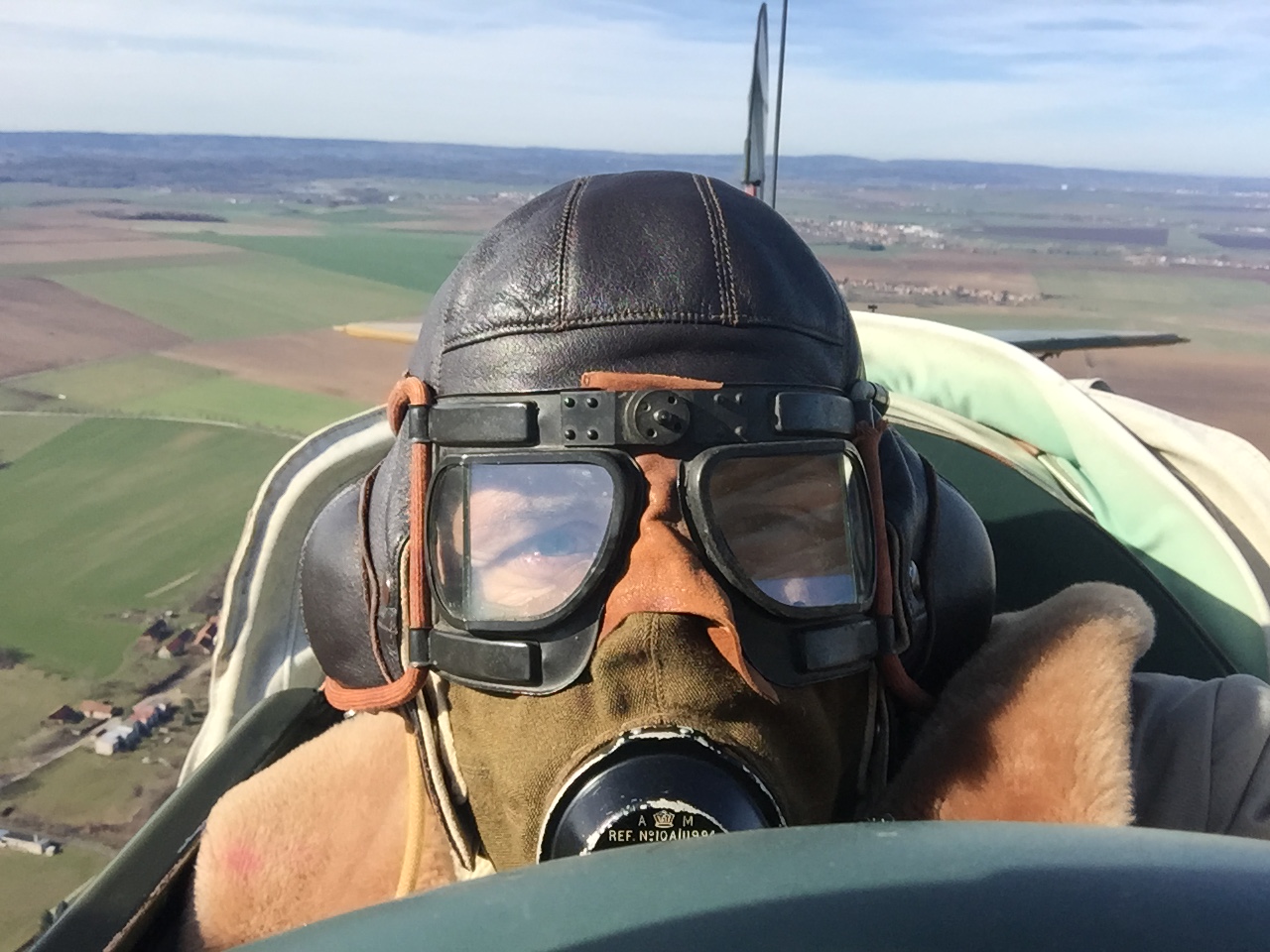 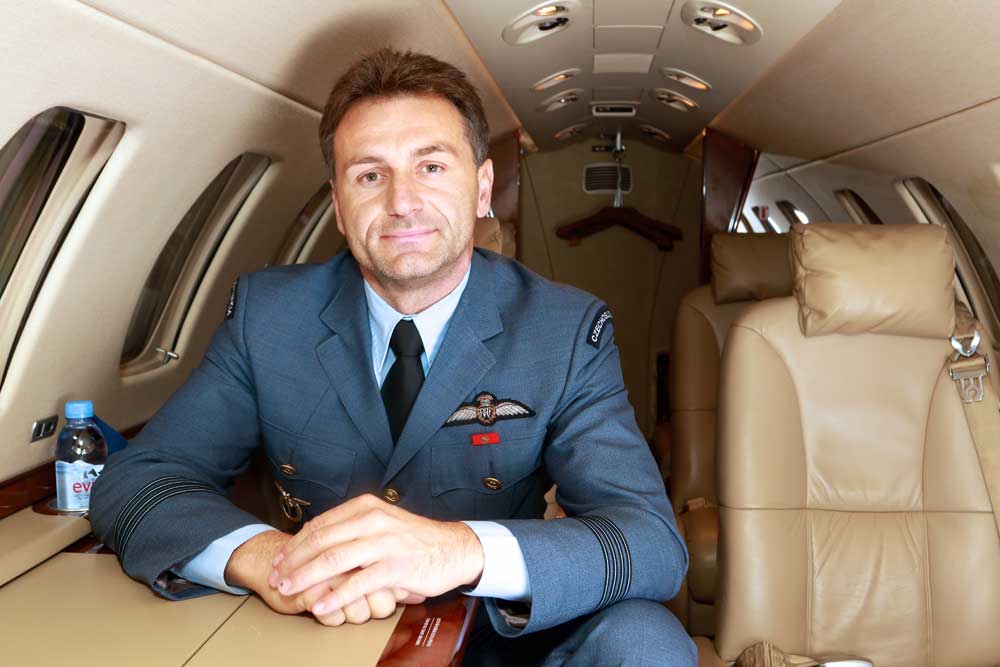